Aspirina, a humorous, artistic and feminist magazine, closes.
Starting up is Erbacce. Forme di vita resistenti ai diserbanti (meaning Weeds. Herbicide-resistant life forms), a blog to tell our history, reflect and laugh. Link: www.erbacce.org.
As of now we will no longer be publishing new issues and new e-books under our old name.
In November 2017, thirty years since the magazine was founded and twenty-two since the publishing trademark was registered, the Big Pharma giant, which manufactures the famous pill, suddenly declared it could not tolerate our existence: a acetylsatirical magazine that speaks through cartoons, videos and satirical stories, was bothering a multinational and creating confusion in its fever-stricken customer base.
We swayed between shock and rage, laughter and curses. We have always loved the word “aspirina” and the pill itself; we’ve played with it, interpreted it through various art forms, with no commercial or lucrative intent.
Our work has been voluntary and unpaid. The same can’t be said of Bayer.
Despite being firmly aware of our stance, the imbalance of power – economic power in particular – meant that we decided to avoid putting ourselves through a lengthy court case.
Bayer’s legal counsel, prestigious law firms specialising in this case in defending the strongest, finally obtained our withdrawal of the registered trademark and the domain; they also confirmed that, as we had suspected, one of the characteristics of bullies is an absolute lack of sense of humour.
Aspirina remains with the 1987/2018 archive in exibithion and books, and on www.erbacce.org at ARCHIVIO ASPIRINA.

May a thousand weeds bloom!

The aspirin that doesn’t go down to Bayer

We are lucky. We have such an incredibly powerful enemy that it will never be able to beat us on our own, human-sized territory.
Our enemy’s name is Bayer, the German multinational that bought out American Agrochemicals giant Monsanto, manifactures of herbicides an OGM seeds, in 2018 for some 66 billion USD.
We are, or rather were, called Aspirina la rivista, published from 1987 to 2018 thanks to the hard work of our volunteers, artists from all over the world, illustrious writers and others who were being published for the first time. A feminist peal of laughter in unison. For 30 years we shared our name with Bayer: they manufactured the highest selling acetylsalicylic acid pill; we produced the most hilarious acetyl-satiric magazine.
This sharing continued without problems for many years. In 1995 Libreria delle donne di Milano, editor of the magazine, has registered the trademark Aspirina for publishing, category 16, at the UIBM (the Italian patents and trademarks office) of the Ministry for Economic Development; this was not out of a fear of Bayer, but to safeguard our rights in the publishing industry. The trademark has been renewed every ten years, up to 2025.
Since 8 March 2013 the magazine has had a remarkable re-launch online, offering free access along with a shop where readers can download PDFs of isssues or a selection of e-publications for a few euros. The editorial team and writers worked free of charge, as occurs in many artistic and political initiatives.
In terms of search engine ranking, the magazine had attained an excellent position: on Google, it appeared immediately below Bayer’s paid ads.

The graphic design and texts of our magazine have always played upon the metaphor of the pill, which in our hands became a lovable little creature. After all, the choice of name Aspirina was made in 1987, when the poet and writer and poet Bibi Tomasi declared her love of it, as she took it to ease neck pain from writing on a typewriter. Our relationship with Aspirina was an artistic infatuation, never a commercially-motivated relationship. It was an artistic version of a female name with a diminutive ending, and a round symbol, like a small moon.
We and our little pill grew together, in a natural and beneficial way, with mumble mumble thoughts and carefree laughs.
And meanwhile, what was our German namesake getting up to?
It was planning to merge with Monsanto and getting nervous because the EU Antitrust body was putting the brakes on this marriage.
While their armies were marching along, flanked by units of lawyers and IT experts, somebody spotted an element of disturbance: us. So one day in November 2017 the Studio Brevetti&Marchi (Patents and Trademarks Office), where we had deposited our trademarks, received from Bayer Intellectual Property GMBH a cease-and-desist letter that challenged our right to use our own name, which had been their sole property from time immemorial and must be abandoned as soon as possible, relinquishing our legally valid registration and our domain name www.aspirinalarivista.it. 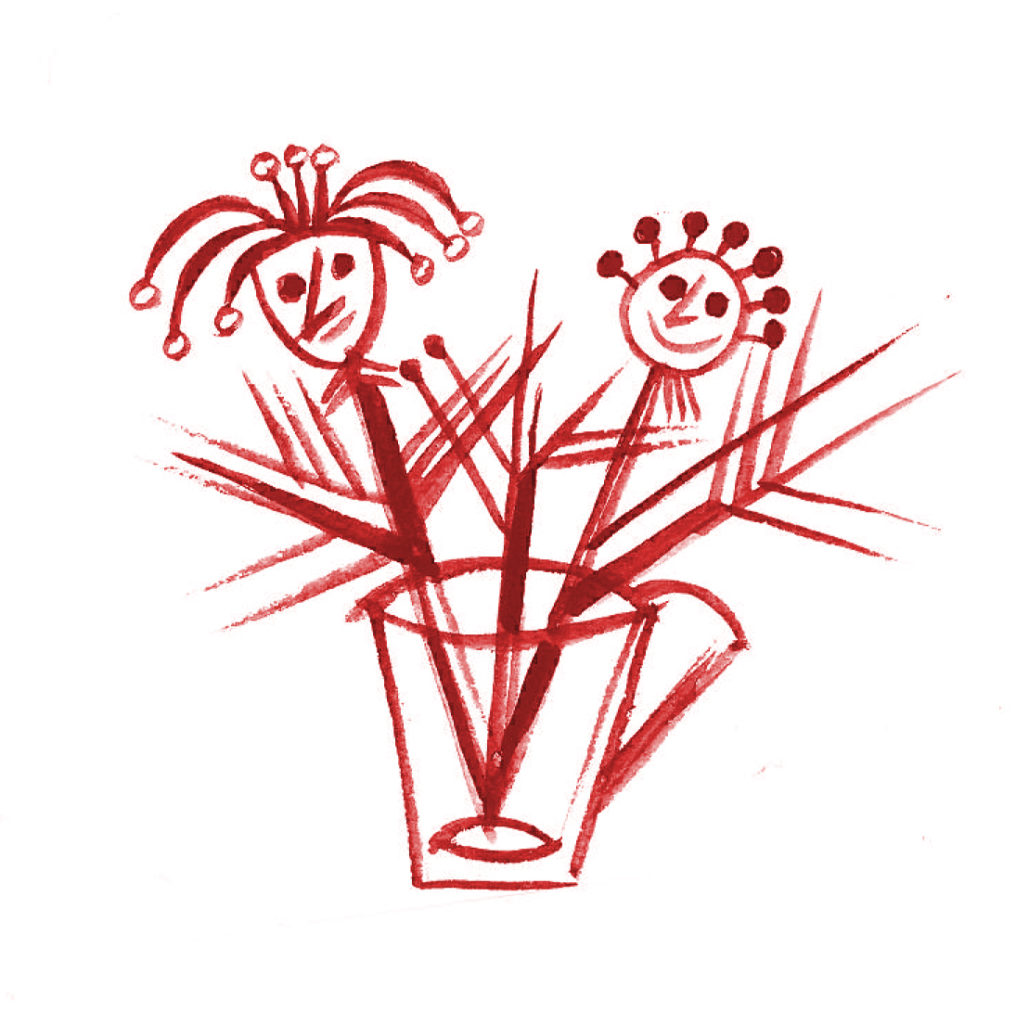 They accused us of creating confusion in their customers, as though people with a bit of a temperature wouldn’t be able to tell the difference between a medicine and a magazine. In the second part, the letter lightened up and suggested some acceptable settlement solutions, such as us adding a disclaimer on our homepage explaining that we had no links whatsoever with the Bayer Group.
For months on end, Bayer’s legal team fluctuated between making threatening demands and diplomatic statements. For months our lawyers assisted us, giving as good as they got.
The bayerians preferred to avoid a lawsuit as they were aware of the reasons behind our trademark, which had been registered for decades and had never been defamatory or damaging to the business or image of the pharmaceuticals company. We didn’t want to risk a lawsuit, basically due to a lack of financial resources. The sheer disproportion was clear to see.
After a year of torment we chose to come out of it creatively, rather than spending years battling in court.
We had had enough of negotiations laden with vexatious and unfeasable penal clauses, and decided to concentrate on saving our work.
In January 2019 we sold the registration of the magazine and domain name rather than accepting the ridiculous compensation offered by Bayer and the chains with which it would have bound us.
We chose the freedom to tell this story.

We former aspirins have always been sensitive to the reasons of eco-feminism, as proves the fact that we published the videos by Argelia Bravo, a wonderful Venezuelan artist active against the USA company Monsanto, who produces pesticides and herbicides. Bayer’s attack against us has made us even more attentive to eco–feminist questions, but we’ve always known that our feminist satirical magazine Aspirina acetilsatirica was an independent form of life, existing outside the global market and global forces, and rebelling against the powers bullying us. And a moment came when its existence was tolerated no more.
This kind of extinction to which we were condemned by Bayer, caused a burst of freedom in all of us. As Vandana Shiva said, and we quoted in one of our editorials, Extinction is the only way patriarchy deals with all that is alive and free. First and above all, we wanted to survive, and we have understood that our capacity for survival, as is often the case with women, is very strong and that it lays outside the official world, it grows in marginal areas, in spaces created and tended by us.
We are eco-humorists! Humor is the ultimate marginal language, and what’s more: it’s a language growing on ruins. Satire is particularly dangerous, it plays with fire. Jesters, inside or outside courts, are always risking their neck. We are aware of the risks we run, and therefore we consider Bayer’s attack also a recognition, they recognize we annoyed some people. So we accept it as a badge of honor. Besides, weeds can be poisonous, they can have the power to heal but also to poison bodies that believe themselves healthy. For us they are a form of regeneration, a witch’s remedy, and a way to find again our voice and our laughter. Argelia Bravo’s video, Tutorial de cuchara (cuchara meaning both spoon and vagina) it’s an ironical war dance against Monsanto, the agrochemical giant acquired by Bayer in 2018 and their fellows. For us it’s almost a soundtrack for our fight.
In this time, when all the life on the planet, and more specifically plant life, is under attack, to identify with weeds is for us a political stance.